What you get when you set David Lee Roth's vocals and lyrics to John Lennon's piano? Words simply cannot describe ... just check it out.

Guitar Instructor Lick of the Week

Because I not only manage the site but also play guitar (and used to teach), I often come across cool licks that would be fun to share, so I thought why not start a GI "Lick of the Week." Each Tuesday, I will post something new, covering a variety of styles and genres and various skill levels.

This week's lick makes for a fun, fiery solo capper and is a favorite of Joe Bonamassa, with very similar versions favored by Zakk Wylde and Eric Johnson. It's a sequence of quintuplets (five notes per beat) that descend through the minor pentatonic scale, with a cool octave displacement move as icing on the cake. The lick is presented here in D. It is typically played rather fast. Start slow and use strict alternate picking throughout. I gave a metronome range of 48 - 90, with 48 being a good starting point to practice it in time, and 90 representing a pretty blistering pace. I've heard all three aforementioned guitar heroes play it at even faster tempos, but if you can play this one cleanly and in time at 100 bpm, you don't need this lesson.

Good luck, and remember: playing it IN TIME is key!

PRESS RELEASE: August 27, 2010, Meridian, MS … Peavey Electronics is sponsoring the Project Independent 2010 US Tour, which launches tonight in Atlanta, GA. The nationwide showcasing program provides independent metal bands with the opportunity to perform for music industry reps and ultimately win the headlining spot on the 2011 tour.

All bands appearing on the tour will perform with an all Peavey backline including:  6505+ Head, 6534 Head, Tour 700 Bass Head, and Peavey guitar and bass Cabinets. The artists will also have the chance to be profiled on Peavey.com.

A few showcase spots are still available in select cities on the tour.  Interested bands should apply online at projectindependent.net. Selected bands perform in exclusive artist showcases and receive a critique by a panel of industry experts including a promoter, a producer, and a touring musician. Groups who receive high marks advance to the finals where online voting will decide the 2011 Project Independent Featured Artist.

The winning band will receive over $10,000 in prizes to jump-start their career, including gear from Peavey, a headlining spot on the 2011 Tour, cash, music distribution, CD duplication, and tour merchandise. Details on the rules and prizes can be found here.

Peavey will follow the tour with online photos and highlights at Peavey.com.

For more information about the Project Independent Tour visit www.projectindependent.net.

This week, the Gibson Custom Shop announced an upcoming reissue of the 1974 Les Paul Custom that Randy Rhoads made famous on "Crazy Train" and other Ozzy Osbourne classics.

Twenty years ago tonight (8/26/1990), guitarist Stevie Ray Vaughan played his final show, opening for Eric Clapton on a bill that also included the Robert Cray Band, at a sold-out Alpine Valley in East Troy, Wisconsin. The evening also featured an encore jam on "Sweet Home Chicago" with Clapton, Vaughan, and Cray along with guests Buddy Guy and SRV's big brother Jimmie Vaughan. Later that night (actually, early the next morning), the helicopter Vaughan was traveling in crashed behind the venue, killing all on board. Vaughan was 35 years old.

It's hard to believe that 20 years have passed, perhaps because Stevie's music is timeless. Indeed, songs like "Pride and Joy," "The House Is Rockin'," and "Love Struck Baby" have become blues standards, and his covers of songs like "Texas Flood," "Cold Shot," and "The Sky Is Crying" are so definitive it's a challenge to recall the originals.

As an electric blues guitarist, Vaughan's technical command of his instrument surpassed all those who came before him and has yet to meet its match. His guitar tone, even when every young blues axe-slinger in the world was putting on heavy strings and popping a Tube Screamer in front of a cranked Deluxe Reverb, was signature and one of the most identifiable electric guitar sounds in history.

And while we can only wonder what more Stevie might have achieved if not for that tragic helicopter accident early in foggy morning of August 27, 1990, we take solace in the musical legacy he blazed, and we drink in the healing tears of the heavens, as somewhere tonight, the sky is crying.

Here's a recording of "Pride and Joy" from that fateful night. We miss you, Stevie!

Top 10 Beatles Songs of All Time

In a sneak peek at their upcoming special collector's edition "The Beatles 100 Greatest Songs," Rolling Stone offered the top 10 at rollingstone.com, with editorial commentary on each. Here's the list (click on titles to see the guitar tab):

Normally, I think Rolling Stone's lists of these sort are pretty much rubbish (ever see their top 100 guitarists list? Ugh ...), but I must give them props on this one. Truly timeless selections.

Still, we at GuitarInstructor.com tend to think of things in terms of guitar, so here are our Top 10 Beatles guitar songs (click title to get guitar tab):

And the award for greatest guitar interpretation of a Beatles song goes to the one, the only ... Jeff Beck, for his mind-blowing take on "A Day in the Life." His version of "She's a Woman" is pretty hair-raising, too!

Axes and Axles: The Art of Building Cars and Guitars 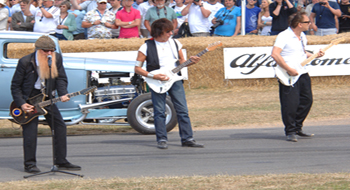 Cars and guitars. It's a match made in rock 'n' roll heaven (see video below), and one embraced by musicians since the days of rockabilly and hot rods. Starting September 4, Automobile of Southern California will present Axes & Axles: The Art of Building Cars and Guitars, to celebrate the 60th anniversary of the Fender Telecaster and to acknowledge the synergy between cars and guitars. The exhibition will be on view at the Wally Parks NHRA Motorsports Museum, in Pomona, California, and will run through June 30, 2011.

The exhibit will feature a vast collection of rare photographs, rock memorabilia, and personal cars and guitars from such auto aficionados and rock icons as Jeff Beck, Billy Gibbons, Eric Clapton, Michael Anthony, Brian Setzer, and more. As part of the 60th Anniversary of the Fender Telecaster guitar, the exhibit will also illustrate the history of Fender and celebrate one of the most famous guitars ever built, the Telecaster.

"Guitars and cars have a great deal in common: both are means of expression, both generated fanatical fans and both offer a stairway to freedom," said Museum Director Tony Thacker, "This new exhibit will showcase the amazing connection of guitars and hot rod building. It's going to make visitors want to rock!"

A variety of educational programs will be presented in conjunction with the exhibition including guitar demonstrations and a panel discussion with hot rod builders and musicians. Visit http://museum.nhra.com for information.