The older I get, the more shocking numbers like these become: I first heard Australian guitar virtuoso Brett Garsed some 22 years ago, when he got the guitar gig for pop metal act Nelson (featuring Gunnar and Matthew Nelson, twin sons of Ricky Nelson). But it was his intense legato work on Quid Pro Quo with TJ Helmerich that totally blew me away. Unlike so many of his Shrapnel-based shred peers, Garsed's lines were informed as much by jazz-fusion as they were by standard rock vocabulary. Unfortunately, and rather inexplicably, Garsed has remained a largely under-appreciated fretboard talent, even though he's managed to make a living as a musician, playing with some of the best names in the business over the past 20-plus years. 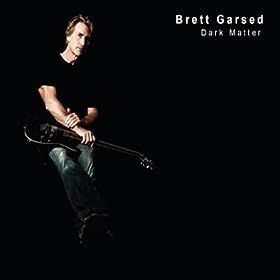 With his new album, Dark Matter, Garsed shows he still carries that same fire in his belly—not to mention his fingers. The album features the talents of bassist/co-producer/mixing engineer Ric Fierabracci, drummers Virgil Donati and Gerry Pantazis, and keyboardist Phil Turcio, along with a guest bass spot by Craig Newman.

The title track kicks off with a brief but funky little guitar riff reminiscent of better "jam band" grooves, before morphing into something altogether different—time and time again. Reaching into R&B, electronica, and even metal territories, it's as if Garsed's "Dark Matter" suffers from multipersonality disorder, but in a good (if ever so slightly jolting) way.

"Android" begins in somewhat progressive manner, calling to mind an uptempo version of early Genesis, but with a downright electrifying fretboard freakout. Later in the tune, Garsed turns it back to his fusion roots, with an infectious bass groove from Mr. Fierabracci. The jazzy ballad "If Only" is a little too '80s smooth jazz-sounding, in composition, tone, and phrasing, and "Avoid the Void" treads similar but slightly more pop-minded territory. But Garsed gets his groove back in spades on the frolicking "James Bong (license to chill)," a roller coaster ride of fretboard fancy more impressive than any old rocket-launching Aston-Martin.

The syncopated guitar riff and masterly bass groove in "Poison Dwarf" give insight into what Rush might sound like if they took on fusion instrumentals, while Garsed's signature legato lines flourish abundantly in the solo. Album closer "Enigma," while no more enigmatic than opener "Dark Matter," nonetheless takes you out in grand style, offering a look at the many fretboard faces that Garsed has mastered, with a tasty bass solo from guest Craig Newman tossed in for good measure.

With chops and phrasing that most guitarists only dream of attaining, Garsed shows yet again why he deserves to be a household name in the world of rock-fusion.

To check out Dark Matter, or for more on Garsed, visit www.brettgarsed.com.

Brett Garsed Dark Matter , A must have for any guitarist looking to advance there guitar technique . Maybe we will see some guitar lessons from Brett's new cd soon @ guitar instructor ?