In his newest master class lesson, Carl Culpepper teaches you how to use rhythmic displacement in your playing. Mastering this highly effective improvisational and compositional tool will help you to create more memorable riffs and melodies. Includes free lesson tab download. 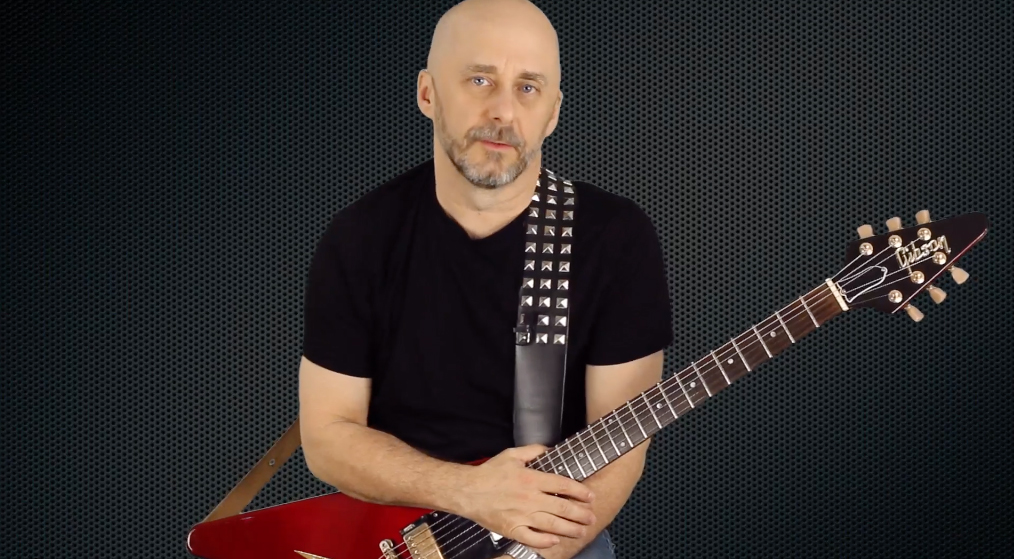 When the Delta blues legend Robert Johnson composed "Sweet Home Chicago"—which actually has very little to do with the Windy City—he never could have imagined that it would become one of the most popular blues of all time. Covered by such icons as Buddy Guy, Earl Hooker, Freddie King, Keb' Mo', Eric Clapton, and Stevie Ray Vaughan, it's the version performed in the 1980 film The Blues Brothers, featuring John Belushi and Dan Aykroyd in the title roles and backed by legendary musicians like Steve Cropper, Matt "Guitar" Murphy, Donald "Duck" Dunn, Lou Marini, and Tom Malone, among others, that has become the "standard" and thus informs the arrangement in our newest G-Plus Song lesson.

Daniel Donato Teaches One of His Favorite Bending Techniques

In this free lesson excerpt, country guitarist Daniel Donato shows you one of his favorite string-bending techniques. For more on his use of bending, check out the full lesson Application of Bends.

Widely regarded as one of the primary architects of the Seattle grunge sound and as being one of the best rock vocalists of the past 25 years, Chris Cornell died in his hotel room early Thursday morning, following Soundgarden's show in Detroit. He was 52.

Cornell first rose to prominence in the late 1980s and early 1990s with Soundgarden, one of the Seattle grunge sound's "big four"—along with Nirvana, Pearl Jam, and Alice in Chains. Soundgarden's 1991 release, Badmotorfinger, which featured the singles "Outshined," "Rusty Cage," and "Jesus Christ Pose," was the band's breakthrough record. But it was their 1994 platinum-selling release, Superunknown, fueled by the smash hits "Black Hole Sun" and "Spoonman" as well as "Fell on Black Days" and "My Wave," that turned the group into superstars.

Cornell also recorded with the all-star grunge group Temple of the Dog, which also comprised members of Pearl Jam and produced a Top 10 hit in "Hunger Strike." And in 2001, Cornell joined forces with Rage Against the Machine's Tom Morello, Tim Commerford, and Brad Wilk, to form Audioslave. That collective would release three album and receive three Grammy nominations before disbanding in 2007.

Cornell's sudden and unexpected death has been ruled a suicide, though his wife, Vicky Cornell, has suggested that it may have been accidental—a result of taking too much of his anxiety medication. You can read her full statement, along with that of their family attorney Kirk Pasich, below.

Our thoughts and prayers are with his wife and three children.

Kirk Pasich, an attorney for the Chris Cornell family, said that the family is disturbed at inferences that Chris knowingly and intentionally took his life. “Without the results of toxicology tests, we do not know what was going on with Chris—or if any substances contributed to his demise. Chris, a recovering addict, had a prescription for Ativan and may have taken more Ativan than recommended dosages. The family believes that if Chris took his life, he did not know what he was doing, and that drugs or other substances may have affected his actions,” he stated. Mr. Pasich noted that some medical literature indicates that Ativan can cause paranoid or suicidal thoughts, slurred speech and impaired judgment.

Vicky Cornell added, “Chris’s death is a loss that escapes words and has created an emptiness in my heart that will never be filled. As everyone who knew him commented, Chris was a devoted father and husband. He was my best friend. His world revolved around his family first and of course, his music, second. He flew home for Mother’s Day to spend time with our family. He flew out mid-day Wednesday, the day of the show, after spending time with the children. When we spoke before the show, we discussed plans for a vacation over Memorial Day and other things we wanted to do. When we spoke after the show, I noticed he was slurring his words; he was different. When he told me he may have taken an extra Ativan or two, I contacted security and asked that they check on him." Ms. Cornell continued: “What happened is inexplicable and I am hopeful that further medical reports will provide additional details. I know that he loved our children and he would not hurt them by intentionally taking his own life.”

Ms. Cornell concluded, “The outpouring of love and support from his fans, friends and family means so much more to us than anyone can know. Thank you for that, and for understanding how difficult this is for us.”

New Lesson on How to Play "Tush" by ZZ Top

We're excited to bring you another ZZ Top classic in our G-Plus song lesson format—"Tush," from the band's 1975 album Fandango. The lesson includes a video lesson from Doug Boduch that covers everything from the raucous main riff to Billy Gibbons's delectable slide work.

How to Play "Dani California" by Red Hot Chili Peppers

Hopefully you've had a chance to check out our recent new video song lessons for "Suck My Kiss," "Tell Me Baby," and "The Adventures of Rain Dance Maggie," because now we're bringing you brand-new Chili Peppers lesson on their smash hit "Dani California," from their 2006 album Stadium Arcadium.

In this new G-Plus Song lesson, instructor Doug Boduch shows you all of John Frusciante's killer riffs and grooves as well as the fiery solo that closes the tune, in step-by-step fashion.

In this week's installment of Free Lesson Friday, blues guitar ace Matt Schofield shows how he uses the major-minor 3rd rub and the b5th note to give his blues phrasing added depth. For more on his approach to blues soloing, see his complete Bluesy Phrasing video lesson, with free lesson tab.