In this Free Lesson Friday installment, instructor Wolf Marshall shows you how to use double stops in the style of the great Chuck Berry. For more, check out Wolf's complete Chuck Berry Style lesson.

With their 1969 self-titled debut album, Led Zeppelin not only rewrote the book on hard rock music but also showed their heavy blues influence, including covers of Willie Dixon's "I Can't Quit You Baby" and "You Shook Me."

The latter, first made famous by the great Muddy Waters, is featured in our new G-Plus Song lesson. In it, instructor Doug Boduch walks you through how to get that huge fuzz tone, hit all the right slide notes, and covers those blistering blues runs that would become essential Jimmy Page repertoire.

Bob Dylan's Martin D-28 acoustic guitar that he used at George Harrison's 1971 Concert for Bangladesh is up for auction with an opening bid of $300,000. You can bid on it here, if you've got an extra half million sitting around.

From the Heritage web site: 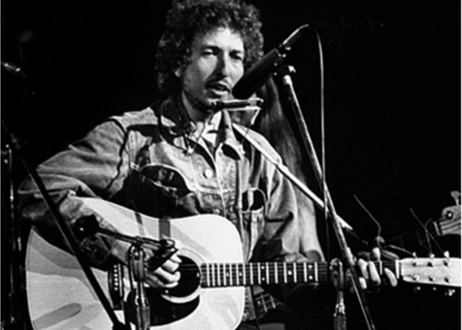 Dylan played the guitar through his entire set at that historic 1971 show, blazing through a mini-set that included "A Hard Rain's A-Gonna Fall," "It Takes a Lot to Laugh, It Takes a Train to Cry," "Blowin' in the Wind," "Mr. Tambourine Man," and "Just Like a Woman" with the help of George Harrison, Eric Clapton, Leon Russell, Ringo Starr, and other notable musicians. The guitar was also used during his entire Rolling Thunder Revue tour from October 1975 through May 1976, as well as on countless other dates. In 1977, he sold the guitar to noted guitar-tech and musician (not to mention, Dylan's guitar repairman at the time) Larry Cragg. The guitar displays wear commensurate with stage use, but respectful wear in the form of the usual light scratches, dings and dents, moreso at the upper edge of the back of the guitar, likely the result of a harmonica holder or the metal buttons of a blue jean jacket. There are some stress cracks running from the bridge. Bridge pins are original, and it has Grover tuners. The guitar includes its original hard shell case.

In 1977 Dylan decided he wanted to play Gibsons instead of Martins, so he offered two 000-18s and a D-28 for sale. Larry Cragg, working as a private guitar tech, was offered the three guitars at Dylan's home in Malibu. He bought the D-28 on the spot for himself and took the other two back to Prune Music in Mill Valley, California to sell on consignment. Thus it was that Cragg acquired "Bob", which he has owned to the present day. According to Cragg, he has kept the guitar in a humidity-controlled environment, with loosened strings for the forty years it's been in his possession, and it has not been played since it was wielded by Bob Dylan in 1977. The guitar is accompanied by a letter of provenance from Arthur Rosato, Dylan's jack-of-all-trades at the time, describing the circumstances under which Cragg acquired the D-28. A copy of the bill of sale dated April 8, 1977 is included. The Prune Music receipt reads: "Bought from Bob Dylan Martin D-28 #196405 and case for $500.00". The guitar is also accompanied by two photocopied articles about Larry Cragg, one from a 1977 issue of Guitar Player; the other from a 2016 issue of Acoustic Guitar. This is a veritable treasure for the Dylan faithful, and a piece of music history.

Who would ever have thought that a li'l ol' blues band from Texas would become one of biggest bands of the burgeoning MTV era? But with their combination of catchy guitar hooks, beautiful women, humorous stories, and that beautiful 1933 Ford coupe, that's exactly what ZZ Top did, beginning with "Sharp Dressed Man," from their 1983 album Eliminator. In our newest G-Plus Song lesson, you'll learn all Billy Gibbons's tasty riffs and licks. Grab the keys and take 'er for a spin.

Learn How to Play "Manic Depression" by Jimi Hendrix

Songs like "Purple Haze," "Hey Joe," and "The Wind Cries Mary" get more widespread attention, but "Manic Depression," from Jimi Hendrix's groundbreaking debut Are You Experienced, is almost more of a "must-know" for guitarists, frequently heard in open jams in blues, rock, and even jazz settings.