Gibson Custom has announced the Billy Gibbons Pearly Gates Limited Edition Les Paul Standard, a recreation of Gibbons's rare 1959 Les Paul Standard. The Gibson Custom Shop and Billy Gibbons himself took painstaking steps to make sure  the replica of this sacred instrument is true to its every form. The Pearly Gates Les Paul will be produced in a very limited quantity of only 350 guitars—250 will receive Gibson Custom's patented V.O.S. finish, 50 will be aged to look exactly like the original Pearly Gates, and another 50 will aged and personally signed and played by Gibbons himself.

The guitars feature figured maple tops carefully selected just for the Pearly Gates model, with a carefully matched faded Heritage Cherry Sunburst finish. They come with Seymour Duncan Pearly Gates humbuckers, which are Gibbons's pickups of choice to replicate the tones of the real Pearly Gates guitar. They also feature all nickel hardware, gold top hat control knobs, vintage Kluson-style tulip tuners, and a lightweight aluminum string-over stopbar that lets you set up the strings just like Gibbons does. The one-piece mahogany neck with a 1959 rounded profile also sports the same long-neck tenon found in every Les Paul Standard from Gibson's Golden Era. You also get period-correct CTS potentiometers and bumble bee capacitors.

For all of the details, visit www.gibsoncustom.com

STEVE VAI Posts Trailer for Where the Wild Things Are DVD

Guitar legend Steve Vai will release his concert film and live CD Where The Wild Things Are September 29th, 2009 on Favored Nations Records. The show was recorded and filmed at the State Theatre in Minneapolis, MN before a sold-out audience as part of Vai's successful Sound Theories world tour. Vai chose the State Theatre to film because of its large, lush acoustics and the historical theatre’s gorgeous interior.

The 2 hour and 40 minute set contains several new tracks and re-orchestrated pieces culled from his rich catalog. His guitar-wielding extravaganza in "The Murder" is an artistic performance piece that must be seen to be believed.

Where The Wild Things Are is available on DVD, Blu-ray, and audio CD. To view the trailers go to: http://favorednations.com/wtwta-preview

"When I put a band and a show together I try to create an entertainment experience that I would like to have if I was sitting in the audience," explains Vai. "I like to witness great musicianship but nothing too cerebral or overindulgent. I like to be stimulated by a large dynamic range of emotional intensities and melodic richness. I enjoy when people love their instrument and it shows by their oneness with it. I like to feel as though I'm part of a family with the audience and the band, and I like to walk away feeling uplifted and not beat up by somebody's ego or the things they hate about themselves and the world. And of course I want a cool t-shirt."

Jensen Musical Instrumentis pleased to announce the latest addition to the Jensen Jet series, the 10" Tornado, sister to the 12" Tornado, a modern speaker offering defined and eloquent tone. The 10" Tornado was requested by musicians so that players can achieve the same power and tone as they enjoy with its 12" Tornado brother.

The 10" Tornado produces crystal-clear clean tones while still maintaining cream-like warmth. The speaker generates a 100-watt whirlwind of power using a neodymium magnet. The advantage of neodymium is its light weight (half the weight of ceramic speaker magnets) and a more natural reaction to a player's style than ceramic magnet speakers.

For more on the 10" Tornado, visit www.jensentone.com

With 35 years of quality guitar-crafting expertise, industry-leading design, and myriad manufacturing innovations, Taylor Guitars is answering the call for quality repairs and knowledgeable service from players of all makes and models with its new Factory Service Center.

Located on the Taylor Guitars campus in El Cajon, California, the Taylor Factory Service center is staffed with world-class repair technicians whose extensive working knowledge of guitar-building techniques and precise attention to detail enable them to bring any brand of guitar back to great playing condition. Using the advanced tools and machinery of the Taylor factory, Taylor's repair techs give each guitar the signature "Taylor touch" to remedy distress that may range from normal wear-and-tear to extreme guitar damage. For guitars in need of a periodic tune-up, the Service Center offers four comprehensive guitar maintenance packages: Refresh, Revive, Renew and Rejuvenate, all designed to restore the guitar to its optimum health.

Taylor Vice President of Customer Service and Repair David Hosler emphasizes that Taylor's passion for guitar quality extends over the entire life of a guitar, noting that a well-cared-for guitar can bring a player many decades of inspiring music. "As any player knows, a quality repair by a knowledgeable repairman can make all the difference in restoring a guitar to its ultimate playing state," Hosler says. "With the resources of the Taylor Guitars factory and the know-how of our service techs, whether it's a quick tune-up or a completely new top, the Service Center will return your guitar to tip-top shape."

Taylor owners wary of shipping their prized guitars can rest assured that our service technicians offer instructions to ship it safely. Taylor guitars are returned in the company's specially engineered shipping carton, which features custom inserts that cushion the guitar to give it the best support possible during shipping.

Open Monday through Friday from 8:30 a.m. to 4:00 p.m., the Factory Service Center is located at 1900 Gillespie Way, in El Cajon, California. Players who visit the Factory Service Center will be greeted in a storefront that stocks a variety of popular Taylor parts, including the solderless, "plug and play" pickups for the SolidBody Classic electric guitar, as well as accessories and apparel from TaylorWare, the company's line of Taylor-branded items.

For the travel-worn guitars of gigging troubadours, the Factory Service Center is currently offering its Refresh package at a special rate. Taylor's repair technicians will restore a guitar to its proper humidity level, adjust the tuners, clean and condition the fretboard, and adjust the truss rod. With a thorough cleaning and polishing and a new set of Elixir strings, the guitar's travel travails will all be remedied. Now through August 31, the Refresh package is offered at a special introductory price of $75. To schedule service, please call 1-800-943-6782 between the hours of 8:00 a.m. to 4:30 p.m.

Twenty-one-year-old self-taught, slap-style guitarist Andrew Hoover will be releasing his full-band debut album, Chances, Stances & Romances, on September 22nd on Rock Ridge Music. The Connecticut-based performer signed with Rock Ridge Music in 2008, and hit the studio with label President Jason Spiewak in New York City to record his full-length debut. In addition to the NYC sessions, Andrew traveled south to work with Chris Henderson of 3 Doors Down fame at his Rivergate Studios in Hendersonville, Tennessee.

"I am very grateful everything Rock Ridge Music has done with me thus far," says Hoover, "The journey is a long one, but working with people like Jason Spiewak and [label CEO] Tom Derr makes me feel that a successful journey in the music industry is possible. Jason made the recording process for Chances, Stances & Romances comfortable and inspiring. I went into the studio every day knowing exactly what it is I wanted and needed to accomplish. So much of my energy when I perform comes from the thrill of playing in front of people. Jason made sure that the energy you see with me onstage was captured and then transferred to tape."

After originally wanting to be a chef and apprenticing at four-star restaurants, Hoover discovered his passion for playing music in high school. By the time he was in college, Hoover realized that making music was what he really wanted to do full time. "I wanted to write songs and be a musician and make a living at it," he says. By the time his sophomore year wound down, he quit school, with his parents' blessing, to follow his dream of making music full time.

Hoover, who takes his cues from a variety of his heroes including but not limited to Stevie Wonder, Otis Redding, Marc Broussard, Ray LaMontagne, and Raul Midon, recorded his first EP in his garage and self-released it in 2007. Hoover then mapped out and booked his own tour, which took him from Maine down to Florida and west to Chicago, hitting all points in between. A second solo acoustic EP soon followed to stoke his growing fan base. He then caught the attention of Rock Ridge Music through the new "old-fashioned way" of MySpace outreach to fans of comparable artists. A Rock Ridge staffer, Carly Kent, received one of Andrew's messages and caught a live show in New York. Blown away by what she saw, Kent passed along Andrew's demo to label President Jason Spiewak.

He will be touring throughout 2009 and 2010 in support of his debut release, building on a touring history that already includes previous performances in support of Sister Hazel, Elliott Yamin, Tim Reynolds, Dave Barnes, Ernie Halter, Ari Hest, the Alternate Routes, and Kate Voegele.

For more on Andrew Hoover, check out his web site or his MySpace page.

ROLAND Announces One in a Million CUBE Amplifier Giveaway

Los Angeles, CA, July 15, 2009 — To commemorate a million Cube amplifiers sold, Roland U.S. has launched a new contest where enthusiasts of the legendary Cube series can win one of every Cube amplifier currently being made.

Cube amplifiers are known for packing a sonic punch in a portable package, and Roland wants to know how players use their Cube. This can be any Roland Cube series amplifier, from the original Cube-40, to the newest member of the Cube family, the Cube-80X. To enter, all contestants have to do is register online and upload a photo of them and their Cube. Contestants can register as many photos as they would like.

"The Cube series has been the workhorse of guitar amps for decades," says Peter Swiadon, Product Marketing Manager. "We are excited to have a contest to celebrate the many ways in which our customers use their Cube amplifiers. With over a million sold, we’re sure there will be a lot of diversity."

Entries for the "One in a Million" Cube amplifier contest will be taken from July 15th - September 30th. Contest is for U.S. residents only.

To enter the "One in a Million" Cube contest, please visit: http://www.RolandUS.com/CubeContest 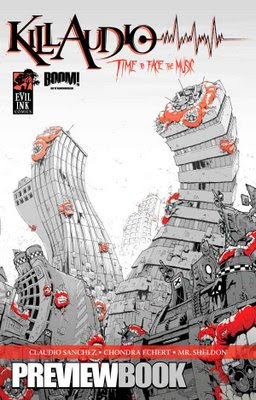 July 15th, 2009 - Los Angeles, CA - Claudio Sanchez, frontman and creator of the Coheed and Cambria mythology, as well as author of the best selling sci-fi comic mini-series, The Amory Wars, is back with an entirely new concept. One of leading creative minds in rock and comics unleashes possibly the most provocative new comic series of 2009: Kill Audio!

"This is disturbing work, and I mean that as a compliment," BOOM! Studios Editor-in-Chief (and author of Kingdom Come and Irredeemable) Mark Waid said. "Anyone who's a fan of The Maxx or of Robot Chicken should check this out."

Kill Audio follows the adventures of an immortal little troll who struggles to find purpose in a land where creativity is a controlled substance. When musical creativity spirals into chaos, Kill Audio discovers his life mission.

Supported by a wildly eccentric posse and a nemesis hell-bent on proving his mortality, Kill Audio takes on non-sensical musical sub-genres while traipsing across a vivid landscape, all of which could only come from the intense mind of Claudio Sanchez.

The Kill Audio Preview Book and the Kill Audio Vinyl Figure* will be available at the BOOM! Studios booth with Claudio signing on Friday and Saturday from 4:00 - 5:00.

*Please note the Vinyl Figure will only be available during signing times.