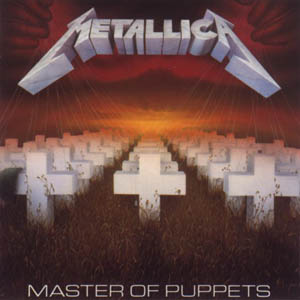 Their 1983 debut album, Kill 'Em All, marked the birth of "thrash metal," and since then, the Bay Area metal outfit Metallica has only become the most popular heavy metal band of all time. While British metal bands like Judas Priest and Iron Maiden had already found success with intricate, dual-guitar riffing and harmony solos, Metallica took it up a notch, adding the aggression and speed of punk music to the mix, in the process creating a new, angry, and testosterone-driven sound.

From the start, guitarist/singer James Hetfield crafted his own pummeling metal rhythm style, preferring downstrokes (almost exclusively) in combination with palm muting to create a thick, percussive sound. While you could say that lead guitarist Kirk Hammett essentially borrowed a slew of Lynyrd Skynyrd licks and played them twice as fast and with the gain on "10," he actually modeled his playing more after players like UFO's Michael Schenker and the Scorpions' Mattias Jabs, utilizing scale sequences and hints of harmonic minor tonality. Then, beginning with 1991's mega-seller Metallica, or the "Black Album," Hammett shifted his style to a more blues-rock, Hendrixian style, replete with oblique bends and plenty of wah-wah.

Metallica set the bar not only for the thrash metal style but also for thrash metal tone. In the early days, Hetfield and Hammett used modded Marshall heads, with Gibson Flying Vs and Explorers. By Master of Puppets, they had both incorporated Mesa/Boogie Mark IIC+ heads into their arsenal and began using Jackson Vs and various humbucker-equipped "super-Strat" guitars from Fernandes and Kramer. For several years now, both Hammett and Hetfield have been ESP Guitars endorsees. Hammett also has a signature series of Randall amps, while Hetfield favors Mesa Boogie and Diezel models.