Monday, September 5th, would have been legendary Queen frontman Freddie Mercury's 65th birthday. To commemorate his excellence, Google has created a special doodle that seeks to capture the dynamism and diversity of Mercury's career through an animation that's as colorful and playful as his stage performances. View the doodle today (9/6) at Google.com (click the play button icon to start it).

Widely considered the greatest rock vocalist of all time, Mercury possessed not only a four-octave vocal range but also charisma and stage presence rivaled only by the likes of Mick Jagger, Robert Plant, and David Lee Roth. As the lead vocalist and pianist in Queen, Mercury was responsible for many of the band's greatest hits, including "Bohemian Rhapsody," "Crazy Little Thing Called Love," "Killer Queen," and "We Are the Champions."

Mercury died on November 24, 1991, of complications from AIDS, becoming the first major rock star to die of the autoimmune disease. As a result, the surviving members of Queen organized the Freddie Mercury Tribute Concert for AIDS Awareness and established the Mercury Phoenix Trust, which has since raised millions of dollars for various AIDS charities.

Orange Amps is giving away a Dark Terror head signed by members of the progressive metal group Mastodon. Based on Orange's popular Tiny Terror amp, the Dark Terror offers even heavier tones geared toward the metal guitarist. Simplistic in design, the EL84-driven tube head features three AX7 preamp tubes, a half-power switch (15 watts or 7 watts), volume, shape (EQ), and gain controls, and an AT7-driven effects loop. List price is $829.00. You can watch a demo of the Dark Terror below.

To enter for your chance to win the autographed Dark Terror, visit OrangeDarkTerror.com and enter your email address. There will be one grand prize winner, and five runners up will receive signed copies of Mastodon's new album, The Hunter. Competition ends September 30th at 12 pm EST.

For all the latest Mastodon news and updates, please visit MastodonRocks.com. 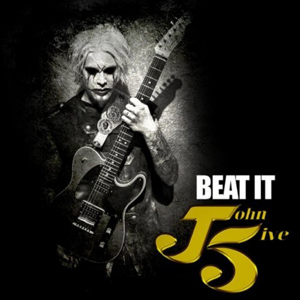 One of our favorite guitarists, John 5, has a new album titled God Told Me To coming out this Fall, and the first single is an instrumental cover of Michael Jackson's classic "Beat It." As you may be aware, Jackson's original already featured plenty of guitar royalty: Steve Lukather wrote and recorded the main riff, and Eddie Van Halen famously recorded the guitar solo.

The John 5 version is available now at Spotify, iTunes, Amazon, and other online outlets. Visit his web site for a complete list of retailers, and then let John know what you think of his cover at the poll he's posted at the site.

We checked it out, and John stays pretty true to the key riffs and licks as well as Jackson's vocal melody and Van Halen's solo, using wah-wah for a more vocal quality and well-timed harmonizations to boost the choruses. He finally lets the shred fly after the chorus, giving it the proper John 5 treatment. I'd love to see the video he might come up with for this ... hope he does one.

Meanwhile, here's a live clip of John 5 doing part of the tune during his solo at a Rob Zombie show in late 2010.

The 2-DVD live set was filmed with 14 HD cameras and 5.1 surround sound during the band's debut tour in the summer of 2011. Over three nights, playing to packed venues in the German cities of Hamburg, Munich, and Berlin, the 18-song set list (17 originals and 1 cover) hits on both of BCC's albums—2010's debut and 2011's sophomore release, which we named the best rock album of 2011 (so far). Live Over Europe highlights include the songs "Black Country," "One Last Soul," "Save Me," "Man In The Middle," "Cold," and "Song of Yesterday," which fans can sign up to receive as a free audio track download, available Sept. 8, here. Bonus features include an exclusive 28-page collector's booklet and DVD with a 20-minute "behind the scenes" featurette and photo collection.

As part of J&R Adventures' strategy to use social media as an integral part of the initial marketing launch of Live Over Europe, they created the Facebook BCC Event Page. Facebook members can join the page here to receive an exclusive glimpse of the new DVD and a chance to download the live free track "Song of Yesterday."

Legendary Australian guitarist Tommy Emmanuel has launched the new Tommy Emmanuel Web 3.0 site in advance of his U.S. tour, which kicks off September 7 in Milwaukee, WI. The revamped web portal and stateside tour dates build on a high-profile year for Emmanuel, celebrated as one of the world's greatest guitar players, and an all-time master of fingerstyle technique.

A platform designed to facilitate an immersive experience for the artist's legions of fans worldwide, Tommy Emmanuel Web 3.0 creates a comprehensive online destination for all things Emmanuel by interconnecting three distinct sites: TommyEmmanuel.com, with web design by Ramon Dodd, and logistics by Gene Quinn, offering the latest news, artist/tour information, photos, fan forums, discussions groups, mailing list registration, and links to shop; CertifiedGuitarPlayer.com, home to the official Tommy Emmanuel storefront for music DVDs, merchandise, instruction books, and gear; and TommyEmmanuel.TV, an immersive online social and educational experience featuring exclusive footage of live performances, interactive lessons, interviews and a behind-the-scenes view of Tommy on the road as he tours the world.

Tommy TV treats fans and musicians to never-before-seen video content across a variety of engaging channels; passenger-seat views of Tommy on tour in the Endless Road channel; interviews and impromptu jams with the world's top players in Tommy & Friends; enlightening lessons and tips for players in Instruction; inspiring insight and guidance from Tommy in the Face Time channel; exclusive footage of live performances in Concert Hall; and behind the scenes happenings at events, workshops and concerts in In The News. Tommy TV allows viewers to create playlists, share videos, participate in discussions, zoom and loop video, and connect with other Tommy fans.

Released in February 2011, Emmanuel's latest album, Little By Little, presents 24 songs and features collaborations with guests. On the album's release day, Emmanuel performed a sold-out concert in San Diego, CA, which was filmed in HD for PBS Television, and Tommy Emmanuel and Friends: Live From The Balboa Theatre has been airing on PBS stations in the U.S. since June.