Music to Your Rear?

We're all for the "eat, sleep, and breathe guitar" lifestyle, but this may be taking things a bit too far. Jammin' Johns has introduced guitar-shaped toilet seats. Yes, you read that right - toilet seats! For as little (?) as $169, you can rest your derrière on a Strat- or acoustic-shaped seat and ponder the use of 12-tone rows in trance-polka jams or whatever you ponder while sitting on the porcelain throne.

Giving credit where it's due, we found this one over at the fine guitar blog Guitarnoize.com and just had to spread the word.

Tonight (Nov. 5), Billboard will fete heavy metal iron man Ozzy Osbourne (guitar tab) with the Legend of Live award at the 2009 Billboard Touring Awards, at New York City's Roosevelt Hotel. The Legend of Live award recognizes an individual who has made significant and lasting contributions to live music and the touring business, and acknowledges the recipient's commitment to the art of performing live and reaching fans through the concert experience.

In 1996, in response to being snubbed by the Lollapalooza powers that be, Ozzy launched Ozzfest, a touring festival for hard rock and heavy metal bands. Since that first tour, Ozzfest has gone on to become the most successful touring festival in history, and perhaps more impressively, nearly every new major hard rock band to break in the past 13 years is also an Ozzfest alum.

In an interview on Billboard.com, Osbourne talks about a lifetime of touring experience, giving fans his all every night, good gigs and bad ones, his sometimes hokey stage antics (beware of the fire hose!), being married to his manager (Sharon Osbourne), and, above all, keeping it real. Read the whole story here.

Among the new generation of metal and shred guitar heroes, Children of Bodom main man Alexi Laiho ranks among the best, as he ably demonstrates on the band's sixth CD, Blooddrunk. Now you can learn every blistering riff and solo with this new note-for-note guitar tab book from Cherry Lane. The 128-page book contains both standard notation and guitar tab for all nine songs, including "Done With Everything, Die For Nothing," which is also in the Guitar Hero 5 video game.

Click here to purchase the book, or visit your local music dealer.

Song List:
Banned From Heaven
Blooddrunk
Done With Everything, Die For Nothing
Hellhounds On My Trail
LoBodomy
One Day You Will Cry
Roadkill Morning
Smile Pretty For The Devil
Tie My Rope

Top 5 Jazz Guitarists of All Time

Lately, I've had a major jones to improve my jazz chops, so my practice routine has included a lot of reading through transcriptions of jazz standards and classics from the Real Book, various Hal Leonard books, or Guitar Edge transcriptions. And as I started practicing, I remembered the sage advice of many a jazz teacher, including my own—Jack Grassel—that to learn how to speak the jazz language, you've got to listen to it, too.

So here's a list of the top 5 jazz guitarists of all time, according to the Fall 2007 issue of Guitar Edge. The best thing about this list is that each of the five has something unique and essential to contribute to your growth as a jazz guitarist.

5. Pat Metheny
Metheny's approach to his craft is serious and his jazz vocabulary formidable. Hallmarks of his style include thematic motifs—melodic, rhythmic, and harmonic—that he develops while improvising. His lead playing is also highly rhythmic, using syncopation and across-the-bar-line phrasing to great advantage.

3. Django Reinhardt
With only two fret-hand fingers at his disposal, Reinhardt typically developed lines linearly across the neck, which resulted in unique phrasing. In fact, he rarely used scales, per se; instead he based his improvisations on arpeggios, often including open strings. He did, however, often employ the chromatic scale, from which he pulled lightning-fast runs using just one finger up and down a single string.

2. Wes Montgomery
Key to both Montgomery's tone and phrasing was his use of his right-hand thumb, whether plucking sizzling single-note bop lines or strumming his trademark octaves. But even more impressive, Montgomery was the rare guitarist who could construct a nine-chorus solo (16 bars each chorus) and not repeat a single lick!

1. Joe Pass
An absolute master of harmony and chord melody, Pass used walking bass lines, melodic counterpoint, and his sophisticated harmonic sense to sound like two or three guitarists playing at once! And his remarkable rhythmic feel allowed him to seamlessly transition from up-tempo to rubato feels—an important skill when performing solo.

Former KISS guitarist Ace Frehley has released a new solo album, Anomaly, which debuted at #27 on the Billboard album charts. On a recent press junket in New York City, Frehley stopped by the Gibson Guitar showroom and gave an interview to "Talking Metal" host John Ostronomy, which has been posted at YouTube (see video below). In the interview, Frehley talks about the record, his new signature Les Pauls, and even shows Ostronomy how to play the main riff in "Outer Space," which is the first single from Anomaly.

Guitar Edge magazine also featured Ace in their monthly "5 Questions With ..." column, in the November 2009 issue. You can read Ace's responses here.

But the Ho! Ho! Hoey tour is more than a Christmas tour. Hoey has used the annual event to raise funds for many charities along the way. His 2006-2008 Metal Health concerts raised money for Connecticut Children's Hospital; he has auctioned himself off for private guitar lessons for four years in a row, raising over $5,000 to support the New Hampshire Food Bank's "Lend A Helping Can" food drive; has raised money for Toys for Tots with the Marine Corps; and his guitar auctions for the Boys & Girls Club in Visalia, CA, for 2007-08 has raised over $25,000.

Big BOSS Giveaway: Guess the Riff and Get the Gear 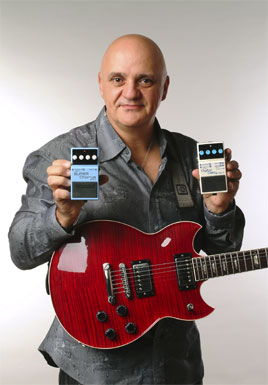 To enter, contestants should visit www.BossUS.com/BigBossGiveaway, listen to the featured riff, and pick out the BOSS Distortion or Overdrive pedal that is used to make that particular tone.

The riff will change every two weeks, and a different signed BOSS pedal from a famous guitar hero will be given away, as well as $1,000 in BOSS gear. In addition, a grand prize of $1,000 in BOSS gear and one signed pedal from each of the four guitar heroes will be given to any contestant who enters the contest between November 1 and December 31, 2009. Contestants can enter once every two-week period, giving them up to five chances to win.

One signed pedal for each guitar hero (four in all) and $1,000 in BOSS gear

Contest eligible in the U.S. only. For more information, visit www.BossUS.com/BigBossGiveaway.