Five Finger Death Punch have released a video (see below) for "Hard to See," the hit single off their highly anticipated upcoming new album, War Is the Answer (out September 22 on Prospect Park Records).

Playing on the primordial terror of getting buried alive, Ivan Moody sings "Hard To See" on his back in an open grave, shoveled dirt splashing on him as he does. Later, the entire band sets up in the cemetery, and there Five Finger Death Punch rocks hard enough to wake the dead—literally. The band slows the footage down enough so that the viewer can see every guitar string vibrating. Don't miss your chance to see Five Finger Death Punch live, headlining the Shock and Raw Tour this fall with Shadows Fall, OTEP, and 2 Cents as special guests.

Also, be sure to get the official guitar tab for "Hard to See" in the November issue of Guitar Edge magazine, online September 15 and in stores by October 1.

The second round of dates for Trivium's fall headline tour, dubbed "Into the Mouth of Hell We Tour," have been announced, as have the support acts. The entire tour spans 65 dates and the second leg features Chimaira, Whitechapel, and Dirge Within on the bill. This will be the band's final tour for the Shogun album cycle, as they will retreat from the road and work on new material for their next album after this tour ends.

The second leg kicks of October 29 in Atlanta and runs through December 12. The second leg of dates are as follows. A few further dates will be announced at the end of the month, as well.

As a special treat for their fans at participating venues, every ticket purchaser will receive a unique code that will be redeemable for a full digital soundboard recording of that night's Trivium set.  Check Trivium.org for updates.

Musicians Institute has announced plans to award an honorary Doctor of Music degree to legendary rock guitarist, recording artist, producer, and composer Steve Vai (guitar tab). The award will be officially conferred during MI's summer graduation ceremony to be held on September 18 at LA's Wiltern Theatre.

After first achieving prominence as guitarist for the late Frank Zappa, Vai has gone on to win multiple Grammy awards, repeatedly top critics' and readers' polls, and earn gold and platinum records while becoming the personification of contemporary guitar virtuosity. His latest concert DVD, Where the Wild Things Are, is set for release at the end of the month.

Describing why MI selected Vai for the honor (only the second awarded in the school's history—the first went to bass legend Stanley Clarke, earlier this year), Vice President of Education Beth Marlis said, "Steve Vai has not only inspired countless musicians around the world and played a major role in the evolution of modern rock guitar, he also embodies MI's ideal of the artist-educator who combines relentless pursuit of his creative vision with a sense of responsibility for mentoring the next generation."

In other Vai news, the first single from Where the Wild Things Are, "Now We Run," is now available for download at iTunes.

The premier screening of Where the Wild Things Are will be held September 15 at the Egyptian Theater in Hollywood, California, where Vai and band members will be present to discuss the making of the film and offer behind-the-scenes details of the tour. The screening will be open to the public (tickets available at vai.com), and proceeds form the event will benefit Hollywood Arts, an academy that provides creative and commercial art instruction to homeless and at-risk youth. For more information on Hollywood Arts, visit www.hollywood-arts.org.

Additionally, artists including Slash, Ozzy Osbourne, Tom Morello, and Red Hot Chili Peppers have donated signed items for a silent auction that will be held at the Egyptian that night, as well as in an eBay auction, to help raise funds and awareness for Hollywood Arts. To view some of the items, visit www.favorednations.com/auction.

German metallers Rammstein will release "Pussy," with B-side "Rammlied," on September 22, as the first single from their forthcoming album, which is due out October 20. The single, available exclusively via iTunes, is the first new music to come from the Berlin-based band in over four years. Anticipation for the new album, whose title has been a closely guarded secret, is high with rumors running rampant worldwide as to the theme and contents of the new release. The album will be released in the U.S. via Universal Music Germany through a marketing and distribution deal with Vagrant Records.

A post on from the band's web site this morning heralded the news of the first available music via the "Pussy" single: "Carried by a gigantic wave of testosterone, Rammstein unsheathes its sword and presents what makes man an animal. So start your engines. With pedal to the metal on the Autobahn of German clichés, where homage is paid to the hand-to-hand battle between the sexes with words like Bratwurst, Blitzkrieg, and Mercedes-Benz … to destinations abroad, past Heidi with her burgers and away from the German Fräuleinwunder."

An accompanying video was directed by Jonas Åkerlund; its premiere information coming soon. Pre-production for the new album was done at Castle Beesenstedt in eastern Germany's Halle/Saale while the bulk of the recording was done in late 2008 at Northern California's Sonoma Mountain Studio. As with the band's previous releases, the new album was mixed and mastered by Jacob Hellner in Stockholm.

In support of the new album, the band has announced a fall/winter European tour. Click here for a complete list of dates.

Peavey is offering a free (via rebate) Sanpera I MIDI foot controller (a $129.99 value) to U.S. customers who purchase a new Peavey Vypyr Tube 60, Vypyr Tube 120 or Vypyr 100 combo amplifier from an authorized Peavey retailer between September 1 and October 31, 2009.

The Peavey Sanpera I expands the capabilities of the Vypyr amp series, providing access to the onboard Looper and Tap Tempo features as well as a bank of 12 programmable presets. The Sanpera I also features an expression pedal that can be used with wah, pitch shifter, and volume pedal effects. The foot controller is housed in a rugged cast-metal casing with high-quality metal switches and is self powered via MIDI.

Peavey Vypyr amps are endorsed by some of hard rock's top guitar players, including Matt Heafy and Corey Beaulieu of Trivium, Matt Tuck of Bullet For My Valentine (guitar tab), and Phil Demmel of Machine Head (guitar tab).

Please visit www.peavey.com/vypyrrebate for complete rules and to download the official rebate form. Some restrictions apply. 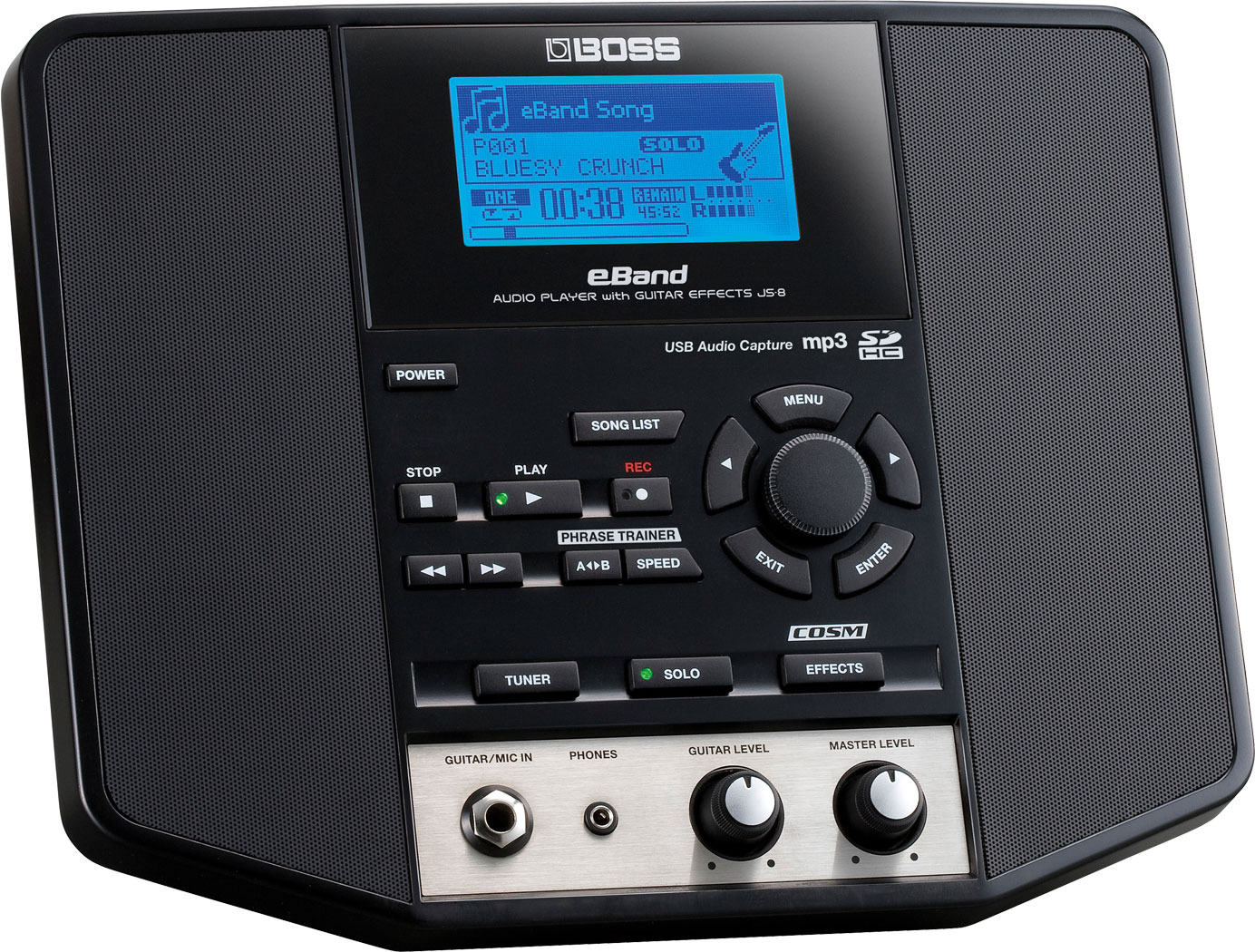 Boss is pleased to reveal the eBand JS-8 Audio Player with guitar effects, the portable audio player designed for guitarists who play and practice at home. The eBand audio player combines playback of full songs, backing tracks, or rhythm loops with high-quality Boss guitar effects and a built-in stereo speaker system. This all-in-one solution is ideal for guitarists who want to learn songs, solos and riffs, practice new songs outside of band practice, play along with any of their own collection of music, or create new songs while jamming with audio tracks.

You can load music onto eBand, with direct playback, from any standard USB memory stick or SDHC memory card up to 32GB. eBand also has the ability to import songs from any audio CD using the included utility software.

Unlike traditional audio players, eBand lets guitarists interact with their music by changing the pitch and tempo independently, or using the advanced Center Cancel function to remove guitar or vocal parts. eBand comes with 300 backing tracks and rhythm loops which also include pre-programmed guitar effects.

eBand is loaded with powerful COSM preamp technology, authentic Boss-quality guitar effects derived from the Boss GT-10, and over 100 preset guitar sounds from every musical genre. To help navigate the possibilities, eBand includes the EZ Tone function, providing an intuitive, easy-to-use approach to sound creation based on graphic icons. In addition, tuner and metronome functions are built in, keeping guitarists on time and in key.

Players can also record their musical ideas using the included USB audio interface. Pressing the Record button during a jam-along session will create and save a new audio file with the entire performance.

The eBand JS-8 will be available in November 2009.

Check out our selection of over 1,000 jam tracks here!